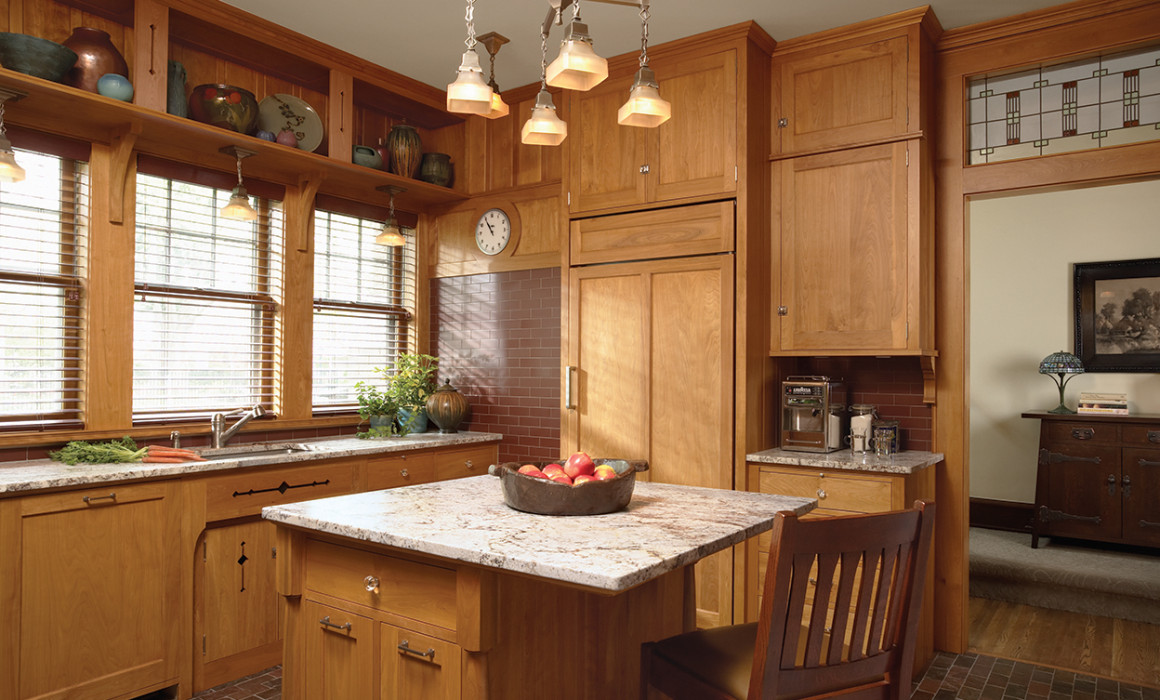 Before the owners of this house moved from New York City to the Twin Cities, they spent five months searching for a home. They looked at new condominiums and houses, hoping to find the modern amenities they had grown so accustomed to in New York. Yet when they first stepped foot into a Lowry Hill Arts and Crafts home, built in 1907, they were instantly enamored with its old-world charm. The home, however, had one big problem: a 1980s kitchen that was a blemish on the historic beauty of the home.

He had grown up around award-winning architecture and artistry. Stellar design—and smart renovation—were a must for him in creating a living space.

His father, an architect of more than 40 years, immediately suggested a solution for the problem. “He suggested David Heide right away,” he says. “He said to me, ‘If you are going to redo the kitchen, you should use a designer. And there is only one person to do it, and that’s David Heide.’”

The family invited Heide to their new home. They’d seen Heide’s renovation work and were instantly impressed.  They weren’t impressed, however, by what they imagined to be an arduous process.

“I remember David saying ‘It’s about the process.’ And in my mind I thought ‘process’ simply meant ‘more time,’” the father says.  “I was skeptical.”

“And then I began to realize; David understands the process meticulously well…he understands every step that’s involved. The process is about all the steps necessary to do it right.”

Heide says it’s important for him as a designer to advocate for the best outcome for the client. The “process,” he says, is about taking the necessary steps to meet the client’s needs and create well-designed spaces. “It is my job to bring information to the client and help them understand that these are the ways in which we can get to that place,” he says.

For the family’s part, honoring that process yielded exquisite results. “I didn’t buy it at first, but it is so important. You really need to honor the process. It leads to an outcome where everything looks like it’s been carefully considered.” 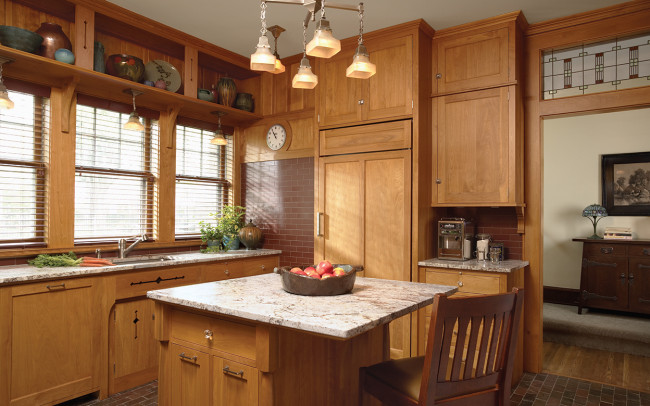 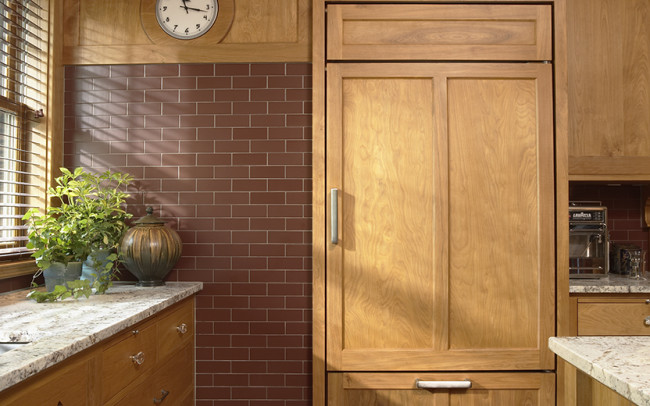 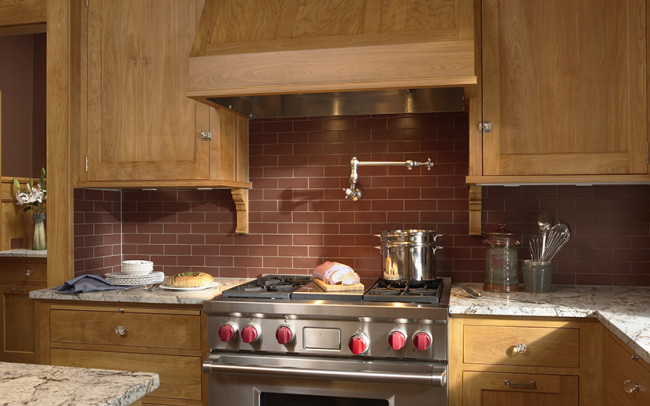 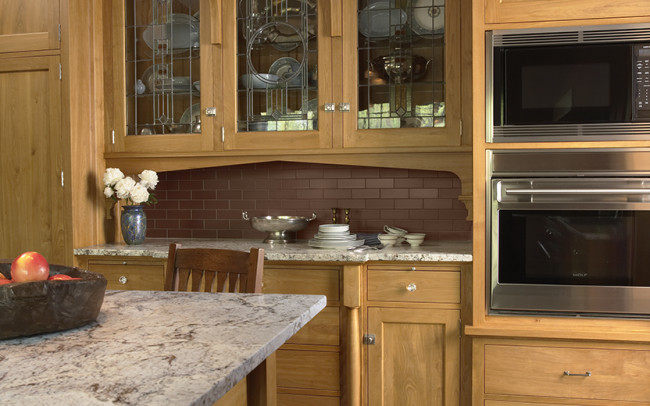 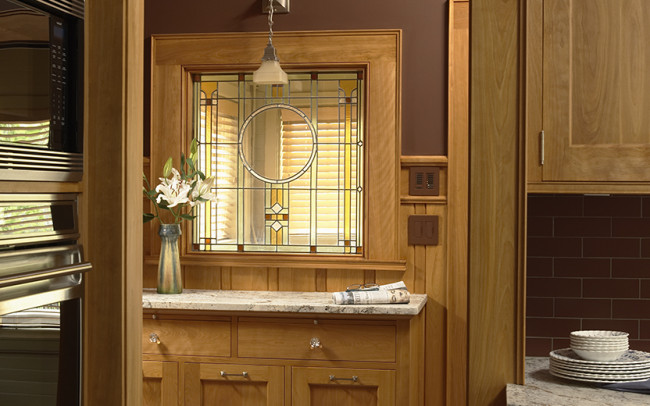 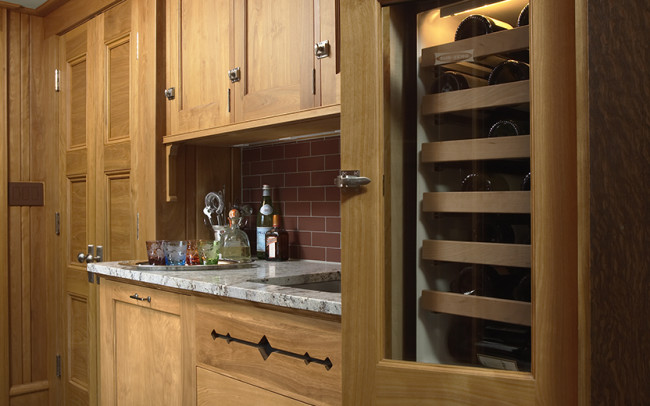 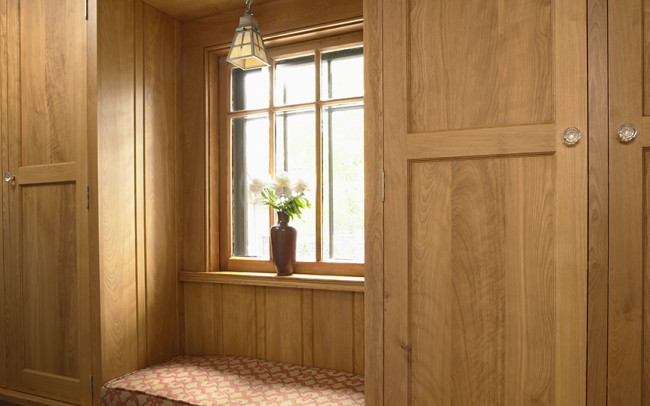 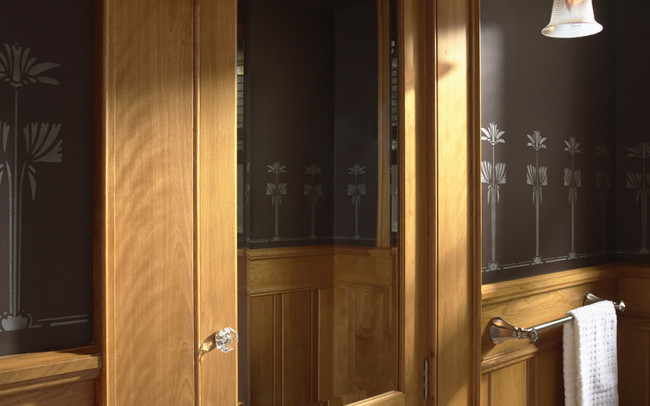 The red birch cabinetry is a standout feature and is true to the home’s original design.

It’s in the details

That process and careful consideration included key details such as custom-glazed tiles, decorative art glass, and red birch cabinetry with a shellac finish, a meticulous seven-step process that involved hand-painting each coat to ensure an artisan finish.

Originally, the family envisioned their new kitchen decked out in clean, white enamel. But Heide suggested red birch cabinetry, trim, and windows. It felt more true to the home’s original voice, he says.

“Each house is informed by some governing principles of design, scale, and proportion,” Heide says. “Listening to that language is important. Being able to really look at an existing home for clues and precedent is an important part of the process.”

Now the red birch cabinetry is a standout feature. When guests enter the kitchen, they remark on it every time. “It puts this kitchen at a different level,” the father says. “It’s what I see in catalogs. Something as simple as the finish makes all the difference in the world.”

An old-world kitchen for a modern world

The result is a modern-day kitchen that pays homage to the home’s original architectural character. Custom details echo patterns found throughout the home, creating a space that’s as holistic and cohesive as it is unique and original.

“David is just a master of understanding what will make the room look like it is original to the house while adding modern amenities,” the family says. “The location of every single thing was carefully thought out; everything feels natural to us. It just works the way it’s supposed to.”

The family again credits the process. “It took me months to understand the idea of process. But I finally got it: You can’t rush your way through it. It’s why everything in the kitchen exceeds all of our expectations.”